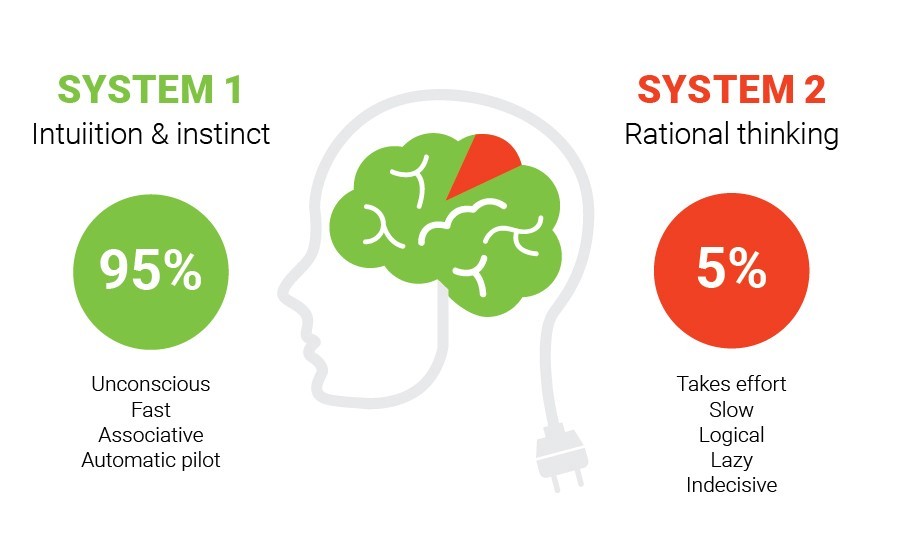 Control or no control?

Control or no Control?

That my friends, is this week's informative, light-hearted and bitesize response to the question.

Ever struggled to decide on something, even when it would make life easier?

Ever wondered if consciousness, and the control we feel, is an illusion?

Ever yearned to know the reason for emotions and why they are so powerful, sometimes, uncontrollable?

Strap in, hold your breath, and get ready for the bitesize dive-in of the day (obviously, the 'hold your breath' remark is purely a figure of speech, but if you took it seriously, please now breathe).

The brain is an absolute belter of an organ (I know, unreal information so far. I did say strap-in).

So much so, that there are two figurative systems within that wrinkly organ inside your noggin that are working independently, interdependently and sometimes, on sunny days, they strike out as partners.

And we're not even at the juicy bits yet.

is our instinctual and unconscious self.

It is the feeling hungry, thirsty,physically reacting without thinking part of us.

It is the all-action actor that generates our intense feelings we have towards politics, sport, and everything in-between.

We have no control over S1. It thinks fast and never asks if we want in. It is the part of our brain that controls our survival and it's always looking to keep you safe.

Or has Daniel Kahneman puts it:

'System 1 is the hero of the book'

is our measured and conscious self.

It is you reading this article. It is me when I wrote it.

It's us deciding what to believe, who to love, and what time to get down the bar on Friday .

This is us thinking slow.

We revel in S2 because  we feel in control. We push ourselves into charted and uncharted territories; always knowing that we made the thought-out, deliberate choice.

In short, S2 plays the supporting role in the movie. There to guide the rash realities of the leading actor, S1.

But,  S1's intensity affects the decision-making of S2. It dictates like a toddler screaming for sweets (shout-out to all those parents)

With two systems working within our brain, one unconscious and the other conscious; with one so powerful it affects the other -

Can we really be in control?

System 1 makes decisions for us every day and we, operating System 2, also make decisions.

Here's a short, but not exhaustive list, of the activities S1 does for us:

S1 is the couch-potato and uses as little energy as possible. It conserves your energy at every opportunity to give you a surer chance of surviving.

It can cause feelings that stop S2 from working.

S2 is complex and needs far more energy to work at maximum levels.

It's why,  after a weekend of drinking , socialising, and general high activity, simple decisions like cooking cause the brain to melt-down like mozzarella (take-away pizza, anyone?)

"The highly diverse operations of System 2 have one feature in common: they require attention and are disrupted when attention is drawn away" Daniel Kahneman wrote

That means, when you're low on energy, or need to cancel out surrounding distractions to focus on a task , S1 will take over from S2. You may feel you're working your way through it but S1 just blocked-out that chat from the back-seat as you merged onto the motorway.

It's seen the danger.

And it's taken over until the danger has passed.

Hello, Ground Control to System 1: can you let System 2 in?

Come on in S2, let's chat about the latest Instagram trend; deliberate the business merger; or talk about Sally's sixth kid with Steve (totally imagined people: any similarity to actual persons is purely coincidental).

S2 put the date in their diary  to attend the party, but like a remote-control car, it needs ten batteries every two weeks just to get going.

S1 is the driver and S2 navigates.

Without  S2 firmly reading the map (errrr, where's the GPS?) S1 undoubtably drives to Dallas when they actually needed Derby.

S2's finger is tracing the A-road and S1 can't hear a thing, unless S2 chimes in with a direction.

But S2's directions start to slip when it's overloaded with thoughts, activities, or general attention on another idea.

If the cognitive load  is too much, S2 is influenced by S1 and takes the comfortable, longer route, rather than the new, but faster-by-fifty minutes, route. This impairing of decision-making is affected by a few things, such as:

"Does he usually have a lazy System 2? Or was he unusually tired?"

In short, S1 fuels the decisions which S2 makes, except when S2 is cognitively overloaded, and then S1 takes over until S2 is ready to navigate again.

Confused? So am I.

If you want to dive deeper into this concept , then take a look at Daniel Kahneman's 'Thinking, Fast and Slow'.

For now though, I'm totally pooped. Ground Control to System 1, can we stop?