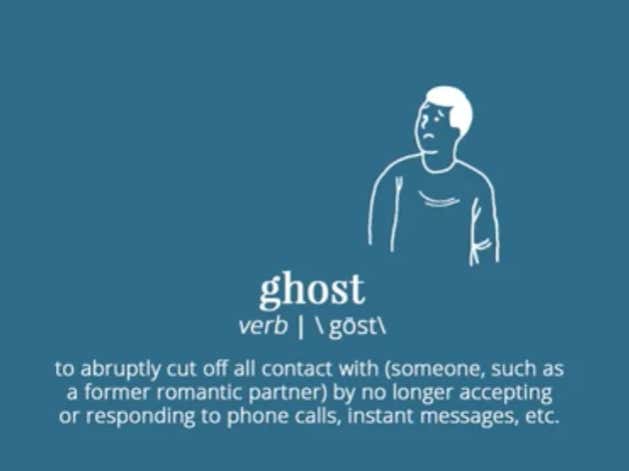 YOU, YES YOU! Have you ever been talking to a potential partner or maybe you're getting to know a friend better and then, they're gone? Almost like they were never there, no warning, no reason why they just vanished off, they're just gone.

It's horrible isn't it, you think things are going so well and then all of a sudden  BOOM they don't want to talk to you anymore and you've been iced out forever.

The act of being cut off from all forms of communication without any reasons why or any warning beforehand is called ghosting. It may play out like this, you're in 'talking stage' with a potential Significant other' and then all of a sudden you wake up one day cant find their insta, twitter or facebook and they've blocked your number and you just don't know why, or they just stopped replying. This is hurting more people than I can fathom to tell you, and it's absolutely horrible, horrible when it's done to you, and horrible when you do it. There's just nothing cool about ghosting either way. As someone who's been on both sides of the spectrum  let me explain to you why it is firstly done.

Well, you see me, I've had one two many conversations where I had to essentially break someone's heart, where I had to be the bearer of bad news and truthfully the guilt of saying' I kinda don't want to talk to you anymore' does weigh heavy on me so I learned(past tense) to ghost or avoid calls. It's been a year long process but I've realized that THIS IS ABSOLUTELY WRONG! (I don't do it anymore) My reasoning in the past regarding this has been flawed, it is much better to be honest with someone about your disinterest rather than leaving the poor child on read for them to ruminate on what they've done wrong. I'm sorry to have put anyone in that position. It hurts to have that done to you, the reason being is if you make your bed you'll lie in it, that ghosting ting will come back and bite you in the behind one day and when you get a taste of your own medicine you'll realize this is not how to treat people. My advice is if you don't want to continue in convo or whatever with someone communicate that, yes, they'll be hurt but it would be far worse if you leave them clueless. People ghost because it's a cowardly way of ending a friendship/budding relationship, it's simple and costs no emotional damage or stress to the ghoster.  That's selfish at best and narcissistic especially if after this article you go and do it again.

Why should you communicate?

YOU, yes you again, you need to communicate because thoughts are killers, literally people have committed suicide over this! Say someone really likes or adores you and you essentially ignore them for, like, ever you will cause them to ask questions about themselves that they probably don't need to ask, and if you couldn't have the decency to tell them you're basically saying, I don't see you as valuable enough to let you know that I don't like you. IT'S NOT COOL MAN, IT ISN'T! It also shows that you're afraid of having difficult conversations with people. One thing I want to say about that for every serial ghoster out there reading this is, hurting people sometimes is very necessary, sometimes some people are not what you need. It's fine if you don't want to engage, you shouldn't feel guilty ABOUT THAT! However have enough decency to realize that this person is a human with value and the least you could do is let them know that you wont be communicating with them anymore. In life you will not make everyone happy and that's okay, it's much more important to aim to be a good person rather than what one classes as a nice person, because a nice person can do what is objectively wrong, like, LIE, all under the pretense of being nice, this is ironically not VERY NICE. OKAY SO imagine you're invited to a very important appointment and out of the blue you decide you wont go, no warning, no nothing you just don't go, in business, in networking we consider that improper yet in relationships because of how easy social media is to navigate we desensitize ourselves to how truly inappropriate this is even within a social context.

THE GHOSTER AND THEIR EMOTIONS: