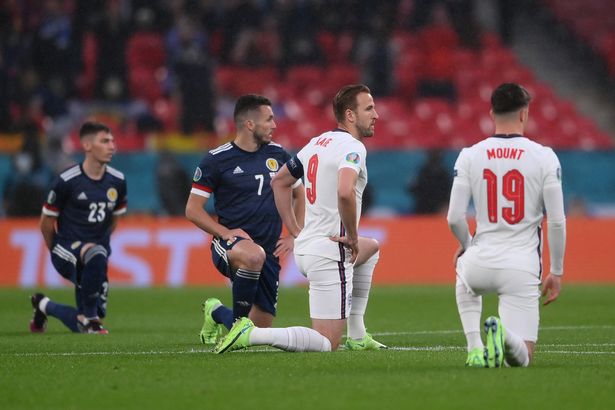 Taking the Knee: Was it Marxist?

With England having managed to grab the final it’s time to ask ourselves about the direction we are going in as a nation. We’ve endured what seems to be a tidal wave of Covid19 cases over this past year in a half and it doesnt seem to be letting up, it has almost seemed like our government doesn’t know what to do, but with England's recent tournament success and our new found racial awareness are we going in the right direction? It seemed so with the 'take the knee stance' that was valiantly done at the Scottish game. The question is why did some boo? Why do some view this as Marxism? Are they being too hasty or is there some truth to what they’re saying?

Now many things have been said since the emergence of the Black lives matter movement, people on both left wing and right wing tend to throw around different words, you may hear ‘woke’ from more left leaning millenials, you may hear social engineering, or race baiting from more conservative leaning people and if you to some degree understand both sides the back and forth can be very confusing. Not to mention whichever side of the fence you decide to sit on has the potential be judged harshly. (Which isn't fair no matter what your political orientation is)

But let’s analyse this very critically because decency these days seems to be made more convoluted. Any football fan knows that the sport of football has witnessed its fair share of racial onslaught, and the recipients of said onslaught are mostly black people. Emile Heskey previously shared his experience of racism whilst playing for Leicester City. Mario Balotelli(who also happens to have Ghanaian in His blood) is said to be one of the players with the most racist abuse heaped on him. Antonio Rudiger who plays as a centre back for Chelsea in 2019 endured his share of abuse also, and that’s quite a recent case. Ever since black people became active members of the sport of football we’ve endured abuse, so in the opening England game against Scotland England showed their support for the fight against racism by merely ‘taking a knee.’ That to me isn't marxism, I do understand that any viewpoint overemphasised has the potential to lose its equilibrium in terms of rationale, but referring to a symbol against racism as “divisive” or “Marxist” is confusing and perhaps quite daft, actually nah it is daft, no perhaps needed in the sentence to be honest! Whatever side you lean on whether left or on the right treating every human being as a HUMAN should be common place for everyone. I shouldn’t have to think you’re more likely to be racist because of where you lean politically. Making a strong statement against racism such as what was done when they bent down on one knee shouldn’t be problematic to any person with an ounce of decency. Let’s be more loving to one another, black and white people alike. We are all Human at the end of the day.