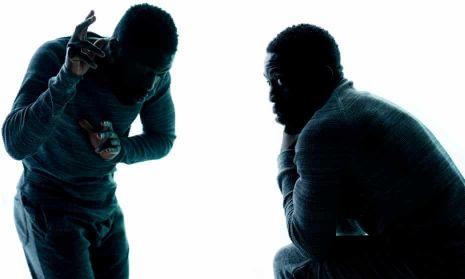 The life of a black man is a complicated life to the rest of the world, we don’t all think the same, we don’t all talk the same but for the most part there will be some things that may have negative effects on us mentally.

The way a black man is raised is important whether the structure of the family he was born into is the traditional nuclear 2 parent family or whether it is a single parent family our upbringing almost always affects how we tend to see things later on in life. It seems to me that in our community “fathers leaving and not providing like they should is a big issue. How does not having a father affect us? I want to preface this firstly by saying that parents are important, whether mother or father they have inherent value, and kudos to every black king or queen doing their responsibility as a black parent. We appreciate you! However, something very specific takes place when a young black man lives out his life without a positive biological male figure. Fathers are there to secure, to hold up, and to guide. Not in a domineering misogynistic sense but in a gentle loving sense. An atmosphere must be fostered where we can grow to have a clear picture of what black manhood is without the stereotypical toxicity the media shoves down our throats on a regular basis. This is not always the case, granted, but more so with the absence of fathers we as black men go looking for counsel in obscure places, we go looking for a Proverbial father in a sense, due to the abysmal living conditions afforded us by the government much of where we find our second fathers is in the streets This isn't always the case(and I will never claim it is) but I’ve seen friends of mine sucked into this all too often due to the lack of parental guidance. Many times, we are taught our values there, and at times we learn destructive habits there. Many a times the streets are hard to leave not because the black person enjoys quote and quote stealing purses and causing trouble, but rather because he has no way of leaving firstly. Secondly, He has his community there, protection is there also. Black fathers, if you have a child and for some reason you aren’t with the mother make sure you do the responsible thing and still care for the child. You are their first point of reference in life make a good example. One thing to add being on the streets contrary to what the media perpetuates doesn’t mean being a gangster, many a times the guys on the block provide more of a family than what we tend to find at home it isn't always what movies\shows such as (KIDULTHOOD, ADULTHOOD) (SHANK) (TOP BOY) present. Many a times our reasons for flocking to the streets are more intimate than that.

Much of the black man’s hurt mentally comes from racism, being racially profiled and stereotyped is hurtful. We get branded and as a result we find it hard to trust. This is an issue that doesn’t just affect we men, but women also. Many black men may have an apprehension towards certain things for fear of being branded. Are there criminals among black men? Yeah, but there was a Hitler among Germany that doesn’t make the whole of Germany Nazi. Martin Luther King said “I have a dream that my four little children will one day live in a nation where they will not judge by the colour of their skin but by the content of their character. Many of us feel like that’s not the case, at first, we were branded as animals during the transatlantic slave trade, then we basically became entertainment when people saw our ability to sing and dance but I think above all things we black people especially we black men just want to be seen as Human beings like everyone else. Not criminals, not entertainers, not animals, but human beings.

Finances are big to everyone but there seems to be a disconnect in the number of opportunities afforded us black men, so many a times the desire to make it is stronger in our case. Finances to many of us equals power and stability. The problem our community has at times is the overemphasis on this. Many a times without money the media and all sorts make us feel worthless, so much around us perpetuates the running after wealth and as we grow as men, we tend to feel less than if we aren’t meeting that financial quota. My advice to all my black kings out there, the bag is cool and all, like by all means get yours but the greatest wealth a man, black, white or blue for that matter can attain is the wealth of the soul. Be wealthy internally, get your dough by all means but not at the expense of character. Let’s prioritize wealth of the soul more than physical wealth because in the end when we die, we won't take physical wealth with us.