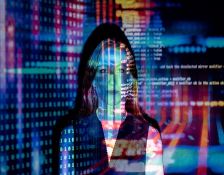 In the previous article, we saw four other technologies that are growing and rising in popularity in this year 2020. This is a continuation of the previous post that can be viewed here 4 Biggest Revolutionary Technologies. Technology has rapidly evolved at such a quick pace that we now live in a time where digital intelligence is used in Spotify, YouTube and even Google to quickly automate the process and speed of web and mobile applications. Netflix uses AI to study your movie and series choices, then show various series that soothe your style.

The growth in technology has led to the rise and surge of various technologies that would lead to a loss if companies and individuals did not become acquainted with it. Let’s look at 4 other important trends that are shaping our digital world.

Vision in the computer world usually involves a software that is able to identify various items, objects, places or even people from visual images or collected by a camera or sensor. I am sure one thing that comes to mind would be Google ReCaptcha that can identify if you picked a car or train to ensure you are human. An advanced form of this technology would allow a smartphone camera to recognise which part of the image that is being used to capture a face such as Google Image Search.

The growth in computer vision could even see self driving cars to be able to view and navigate from dangers which thereby reduces the risk of getting in an accident. In the manufacturing industry, one could use computer vision to monitor defective products and even be able to alert if there is something out of the ordinary without regularly watching 24/7.

Another area where computer vision is used would be in the aspect of enabling face recognition and is even used in the Dubai airport by using Apple FaceID to provide a better experience during customers travel.

Cybersecurity might not really seem like an emerging or rising technology, is also another form of technology that is evolving just like the previous rising ones. Why might you ask? Well look at it this way, threats in the IT world are growing rapidly and many malicious hackers are discovering new ways to illegally access data and act malicious even in the face of the toughest security measures put in place.

Due to this demand, there is a strong need for IT professionals in the cyber security field and has led to it’s massive growth as it is sought 3 times faster than any other tech job. The role ranges from being an ethical hacker to that of a security engineer, and most jobs usually come with a good pay of six figures.

Getting your CV right...

How do i get into programming?