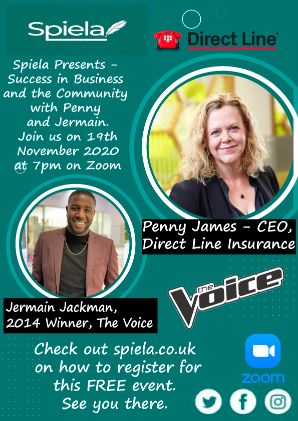 Spiela Presents "Night of business and the community with Penny Jame

Spiela is once again proud to present another 'Spiela Presents' night on 19th November 2020 at 7pm, this time with Penny James, CEO of Direct Line Insurance an Jermain Jackman, 2014 Winner of The Voice co-chair of Hackney Young Futures Commission.

Join us as we discuss business in the community with the CEO of Direct Line and the winner of The Voice 2014!

Penny James was appointed Chief Executive Officer of Direct Line Group in May 2019, having previously held the role of Chief Financial Officer since joining the Group in November 2017.

Direct Line is a leading insurer of cars, homes and small businesses in the UK through its own brands (Direct Line, Churchill, Privilege, Green Flag and NIG) and through partnerships. Penny has extensive financial services experience, having been Group Chief Risk Officer and Executive Director at Prudential plc, where she was responsible for leading risk oversight globally.

Before this, Penny was Director of Group Finance at Prudential. She had previously been Group CFO at Omega Insurance Holdings Limited and CFO, UK General Insurance, at Zurich Financial Services.

Penny was a NED of Admiral Group plc from January 2015 to September 2017. Penny is an Associate of the Institute of Chartered Accountants in England and Wales. Penny is a member of the Association of British Insurers Board and the FCA Practitioner Panel.

Jermain Jackman, born and raised in Hackney, combines his musical talent with pursuing his role as a political activist. He was crowned winner of BBC’s The Voice UK in 2014, tagged as being the ‘Singing Politician’ by Sir Tom Jones and referred to as Britain’s first singing black Prime Minister.

As the co-chair of Hackney Young Futures Commission, advisor for the National Citizens Service, Strategy manager for MyLifeMySay, and studying Politics at University, Jermain is determined to use his voice as a tool for social change. He enacts change by going into youth clubs,schools and estates, not simply to talk to young people, but, crucially, to listen to what they have to say. He is concerned that too often young people’s voices are ignored.

As such, Jermain is determined to raise awareness of youth feeling disenfranchised and without opportunities, as the first step towards finding and delivering solutions that address the complex issues they face.

As someone who was not afforded everything he wanted, Jermain recognises how much his family and community inspired him, and that it really does take a village to raise a child. “I have always wanted to change the world...No dream is too big and no role is too far”. My success my responsibility | Jermain Jackman | TEDxEastEnd

Looking forward to this one.