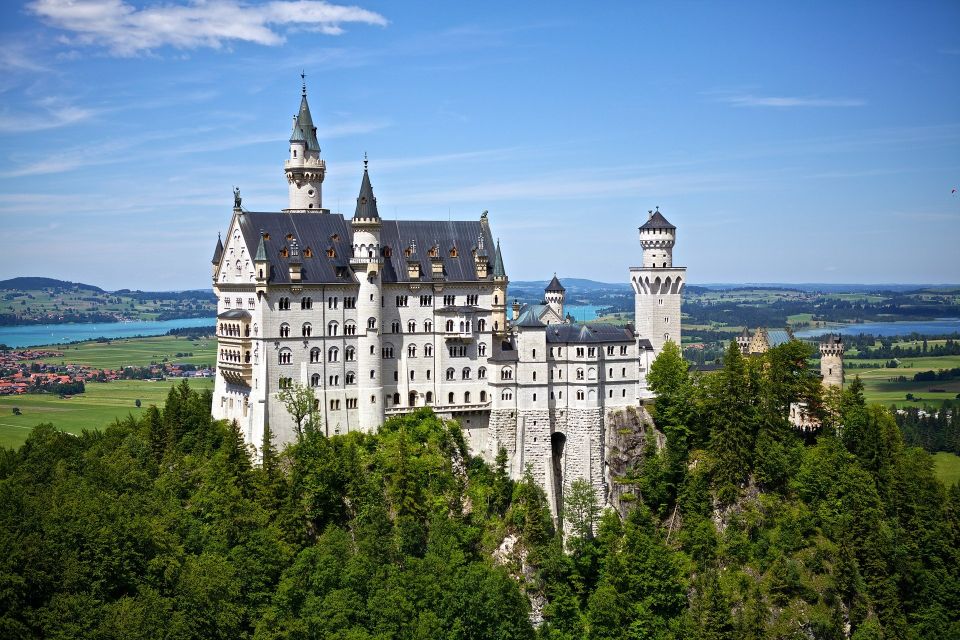 The Road to Fantasy

Ludwig II, the King of Bavaria from 1864 to 1886, was referred to as the “Swan King” or the “Fairy Tale King”.  His desire to escape from the real world found its ultimate expression in a castle he built at Neuschwanstein.  It’s clear he was obsessed with the operas of Richard Wagner.  It was built in a pseudo-medieval style, designed by someone who looked at castles from the Dark Ages through rose coloured glasses.  It is the architectural equivalent to Wagner, who used his musical dramas to resurrect the idea of a beautiful past, full of heroes and heroic deeds. A drawing room is adorned with themes from “Lohengrin”. Ludwig II lived so much in his fantasies that he lost his grip on his finances and the state; he eventually he was deprived of office in 1886.

We perhaps delude ourselves by thinking that we live in a far more scientific and rational age.  The products of our advanced knowledge are all around us: most of us live with the ordinary miracle of a handheld device that can access more information than was contained in the Library of Alexandria.  We can find out the chemical composition of hydroxychloroquine in an in an instant.  We can immediately peruse stock prices in Tokyo.  We can receive election results from New Zealand the moment they are available.

However, does that mean we are less susceptible to going down mental cul-de-sacs than Ludwig?  Perhaps not: social media is creating mini Neuschwanstein’s around us: in the castle of the far right, the images on the walls are of a mythical past, in which there were happy families and good wages and national pride.  If a herald comes to the walls saying that the kingdom is bankrupt and disease ravages the land, it’s easier to stay within its boundaries, shout “fake news” and dump rhetorical chamber pots on the killjoy.

Much of our present politics has travelling been on this road to fantasy.  The seductive siren call to an idealised past may not have Wagner as its main form of entertainment; rather, it has the crude spectacle of Donald Trump going to Wisconsin, a state ravaged by the coronavirus, and urging the governor to open it up, which would only cause the virus to spread further.  The crowd will respond to anyone who intrudes on this fantasy of coronavirus dissipating as if by magic by shouting “Fake news! Lock her up! Trump 2020!” and emptying their rhetorical chamber pots on Twitter and TikTok.   They will dig up fantasy narratives from their virtual drawing rooms in their own Neuschwansteins on Facebook, and say “Look, the world is as I want it to be”, rather than face into what it actually is.  Indeed, Trump may be the dumpster diving equivalent of the “Swan King”, with his pseudo palaces in Florida and New York whose architecture is far less romantic and memorable than that of the Mad King; he has built castles in the air which his followers find compelling nonetheless.

But reality intrudes.  The mechanisms of the Bavarian state couldn’t tolerate a Fairy Tale King who wanted to live in a world of his own.  Similarly, a virus does not respond to the dreams of individuals, it will not heed the command of today’s “Fairy Tale Kings”, the Trumps and Johnsons.   It will do what it is geared to do: to reproduce, to spread, to kill.  There is no drawbridge of the mind that can be raised to keep it out.  It multiplies, it keeps going: the attendees at a Trump rally in Wisconsin may shout till they are hoarse.  However, they have forgotten their mask, a persistent cough has landed, a film of sweat has emerged.  The fantasy comes to an end.  But what is left afterwards?

In Ludwig’s case, at least Bavaria has a tourist attraction.  At least until the Covid period, people could wander through its halls and shake their head at how disconnected the Swan King was from his people and peer into the grandeur of his dreams.  The enduring monuments alongside 2020’s road to fantasy have no such comforts.  Sadly, they may be only gravestones.

I have visited the fairytale castle at Neuschwanstein and I did indeed wonder what King Ludwick was thinking when he spent the wealth of his country on this folly. Is tRump doing the same? Well we know he's a narcissist and that's a bit part of it so it shouldn't come as a surprise to most.