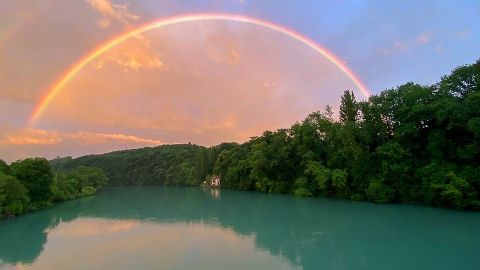 The explosion in Beirut was horrific.  The various films of the event tell the tale: there was first a fire, then bursts of small explosions, then a gigantic blast, with shockwaves reverberates outward.  The Lebanese government has been shown to be callous, incompetent, and corrupt.  International aid is contingent on it going directly to the people, rather than via the government.

Meanwhile, an election has been stolen in Belarus.  There are spikes of coronavirus outbreaks throughout Europe, the United States, and the state of Victoria in Australia.  Unemployment is on its way up in many nations. We are headed into an autumn which could see the pandemic joined by the flu.   While Black Lives Matter has been successful in raising awareness, what practical action will result?  We may have to wait until the result of the November election to find out the answer in America.

When all around seems dark, what gleams of light are there to be found?  There are a few.

First, our science and technology have never been better.  No doubt the aftermath of World War 1 was a grim period, one in which the dead were counted, and empty places at many kitchen tables were numerous.  This was then followed by the Spanish Flu, which took a lot more lives.  But: they didn’t have the science to tackle the flu as aggressively as we have fought the coronavirus.  It is entirely possible that there will be a vaccine available within a year.

Second, while the pandemic has badly affected the economy, at least thanks to the internet more work can be done in isolation.  During the last pandemic, most office work was done in offices: there was neither the space nor the equipment to labour remotely.  Thanks to broadband, Zoom, and cloud-based tools, we can achieve useful work without setting foot into an office building.

Third, let’s not forget that the American electorate has made poor choices before.  In the election of 1920, they elected Warren G. Harding.  He did not survive his term in office.  He was notable for a lack of attention to the corrupt dealings of his friends, which culminated in the Teapot Dome scandal.  Trump manages to combine this level of corruption with distemper and stupidity; it took some time for the American public to see that Harding’s “laissez faire” legacy was a poisoned one.  But eventually this led to the election of Franklin Roosevelt.

It is perhaps on this note that we can find hope: things do turn.  Pandemics, economic crises, even the apparent end of the world have all loomed large.  And yet, we are still here.  Somehow, we made it through.  Somehow, we found reason to hope.  At some juncture, we made different choices and the world improved.

The famous American film director Raoul Walsh made a film entitled “The Roaring Twenties”.  Released in 1939, it featured Jimmy Cagney as a former World War 1 veteran who came back to bleak economic prospects and thus became a bootlegger and gangster.  He has his heyday but the Great Depression ruins him.  He is reduced to driving a cab to earn his wages.  He later confronts an old rival (played by Humphrey Bogart) and states that it’s a new era, in which it’s time to build things.  It’s a critical moment: he realises that the world of gangsterism, Prohibition and dirty dealing is gone.   He is obsolete.   One day the dark period in which we find ourselves will be obsolete too.  We know what we need to do: we need to not just find a cure for the pandemic but also understand how we became so vulnerable in the first place. We need to take care of the natural world to prevent another disaster; we need to build the necessary infrastructure.  We need to stop treating white privilege as if it’s a feature of a benighted past and recognise that it’s a terrible part of the now and address it.  We know what to do: we also need to keep in mind that there may not be a Roosevelt who will come along and inspire us to do it.  The inspiration may have to come from ourselves.  If so, are we ready?

Thanks for this insight and whats key to understand is the timing of this. With everything that is going on in the world today hope is becoming harder to come by. I like how you used the movie instances to further elaborate on your point but this 2020 has been a "crazy" one