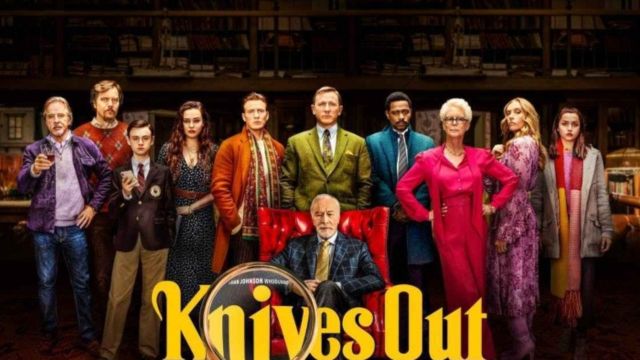 Something for the Weekend: Knives Out on Amazon Prime

There is a place for levity.  Not everything has to be perfectly made to be enjoyable.  Previous examples include the film “Airplane!” which is notable for quickfire gags and profound silliness.  Nevertheless, it’s a cult classic and justly so.  “Knives Out” on Amazon Prime apparently wishes to join this genre.  Or does it?

The premise is relatively straightforward: a crime novel author, played by Christopher Plummer, is found dead, an apparent suicide.  Or is it?  We are introduced to his family, played by an all-star cast including Jamie Lee Curtis and Don Johnson.  A mysterious detective with a pronounced Southern drawl shows up, played by Daniel Craig.  From this point, a complicated murder unravels.

I wasn’t sure if I should be amused, intrigued, or horrified for much of it.  Daniel Craig sounds like Frank Underwood from “House of Cards”.  A Uruguayan nurse, played by Ana de Armas, is shown to have a vital role, and a strange penchant for vomiting if she tells a lie.  Toni Collette is present as a mooching daughter in law who is into meditation.  Chris Evans plays a classic “n’er do well” who is living off his parents’ and grandfather’s money.

The film is set mainly in an ornate house somewhere in New England; the interior somewhat reminded me of the 1972 film “Sleuth” which starred Michael Caine and Sir Lawrence Olivier.  That film, with a much smaller cast, was shocking, enthralling and yet had lighter moments.

“Knives Out” is not this.  It’s too slapstick for that.  There is another reference which sprang to mind, the 1976 film, “Murder by Death” which starred Sir Alec Guinness, Peter Sellers, Maggie Smith and Peter Falk among others.  This was a satire of mystery novels and their accompanying films: it made fun of Agatha Christie and Dashiell Hammett in particular.

“Knives Out” isn’t that either, though I couldn’t help but think that the all-star cast indicated a resemblance.  Like in “Murder by Death”, the actors are clearly hamming it up and enjoying it.  But there is a murder to be solved.   A further mystery result: is it also enjoyable for the audience?

I must admit I was sceptical for the first 10 to 15 minutes.  The references to “Sleuth” jumped out at me.  But once I accepted that this was not going to be “Sleuth” nor even “Murder by Death” (though I believe Rian Johnson, the writer and director was definitely inspired by these two predecessors), I found that I was not wishing for it to end.  Everything, even Daniel Craig’s attempt to ape Frank Underwood, seemed amusing and interesting.  There was enough action to keep me glued to the screen.  Even the house, which seems an over the top, silent actor in this film, is enjoyable to look at.

Special credit must go to Christopher Plummer.  The film was made in 2019.  He turned 90 years old not long ago.  He’s not lost the twinkle in his eye, nor his ability to convince.  His character may very well be the most complex in the entire film and he does it with aplomb.

Kudos must also go to Ana de Armas: her character experiences the most growth, and her hesitant journey through this process also rings true. Ms. De Armas is very versatile: I was shocked to discover that she had previously played the assassin replicant Joi in “Blade Runner 2049”.  An actor with such a range must be in line for an Oscar at some juncture.

“Knives Out” is not my favourite film.  However, like “Airplane!” it’s a diversion, an escape: the serious part of my brain switched off and I enjoyed the ride.  Anyone who needs to step away from a world that can be all-too serious at the moment should switch off the news, find it, and press “Play”.

Wasnt the biggest fan but thanks for this Christian DeFeo

I watched this last and and really enjoyed it. It took me a while to get my head around Daniel Craigs accent but it was a good who dunnit that didnt take its self too seriously.I loved the Hamilton joke, i did acutually LOL.